The city of Maastricht, in the Netherlands, hosted in the past weeks the video art exhibition BodyTalks, featuring 19 video projections and 4 indoor video installations. What is the link with Val Trebbia?

BodyTalks is just an excuse to talk about a wider project aiming at enhancing the interaction between moving images and the audience. Such projects were already launched in several countries around the world: in 2012 UK’s broadcasting service BBC will start the “BBC’ Big Screen Project” which will broadcast live events on 60 screens located in the public space of different cities.  The screens installed in the Zuidas district in Amsterdam are completely reserved for video art, showing videos 18 hours a day.  The common aim of both projects is to create a lively atmosphere while enhancing the social cohesion of the hosting cities.

What can a video installation in public space offer to the villages of Val Trebbia?

The villages of Val Trebbia are often called “ghost towns” due to their scarce population especially during the winter season. Encouraging social cohesion through cultural projects is only one of the many unexplored possibilities that could be embraced and implemented. 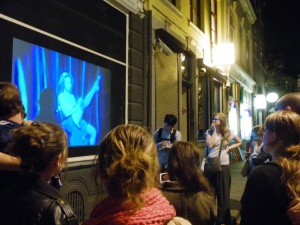 One of the videos of BodyTalks in the streets of Maastricht

A video installation using as projection surface the windows of temporarily empty shops or abandoned buildings would attract more interest towards the villages of the valley and give a new life to these locations whilecreating new occasions for the local population to meet and discuss. Above all, such an initiative would stimulate local creativity through the production of short videos based on a common topic.

The historical, cultural and environmental heritage of the valley are just some of the topics a video installation in public space could elaborate on.

I wanted to share this experience with you and I hope it could become the source of inspiration for someone of you to develop a similar project in the valley.